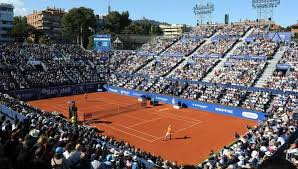 Today we are going to know which two players will face each other at the ATP 500 tournament in Barcelona. The two 1/2-finals are going to be played at the Rafa Nadal Court in the Catalan capital. Let’s have a look.

In the first 1/2-final the Russian player Daniil Medvedev will face Japan’s Kei Nishikori. Medvedev reached the 1/2-finals in Barcelona after a win over the Chilean lucky loser Nicolas Jarry in during the 1/4-finals. Medvedev did the job in two sets, beating Jarry with 6-3 6-4.

Before winning against Jarry, Daniil Medvedev eliminated from the competition the American Mackenzie McDonald.

In the same time Kei Nishikori also did a fine job in two sets in the 1/4-finals, winning against another lucky loser in the main draw – the Spaniard Roberto Carballes Baena. Nishikori showed his class and celebrated a win in two – 6-4 7-5.

In the other 1/2-final in Barcelona the King of Clay Rafael Nadal faces the Austrian Dominic Thiem. During the 1/4-finals Nadal faced the German Jan-Lennard Struff and it was not exactly easy for Rafa, who won the game in two sets – 7-5 7-5. Before this, the Matador beat eliminated his countryman David Ferrer after a 6-3 6-3 win.

Dominic Thiem is the №3 seeded in the main draw and one of the favourites for the title. During the 1/4-finals the Austrian top player also did his job in two sets against Guido Pella from Argentina – 7-5 6-2. But now he will have a very tough challenge against the greatest player on clay courts in the history of the game.

The final at the Barcelona Open Banc Sabadell is going to be played on Sunday. But first, let’s see which players are going to reach it!