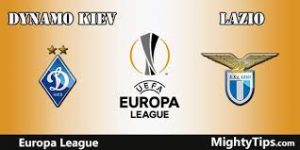 Dynamo Kyiv hosts Lazio in a second leg game from the 1/8-finals of the Europa League. Let’s have a look at this game, which guarantees to be an exciting one.

This match excites because of the result from the first leg. Despite of Lazio being a heavy favourite, the game at the Stadio Olimpico ended with a 2-2 draw. Ciro Immobile and Felipe Anderson scored for Lazio, while Viktor Tsygankov and Junior Moraes raised Dynamo’s chances of qualifying for the next round. All of the four goals were scored during the second 45 minutes of the game.

The result in Rome surprised a lot of people. Because of their solid performance in the Serie A, Lazio were labeled as favourites. But Dynamo proved once again that the Ukrainian teams are pretty strong. Now Dynamo will have the advantage to play at home.

In the Italian Serie A Lazio are currently 4th, continuing their fight for a return to the Champions League. Right now the Eagles have one point advantage in front of the 5th Inter. In their last five Serie A games Simone Inzaghi’s boys won twice, lost twice and made one draw. In their last match Lazio made a dramatic 2-2 draw during the visit to Cagliari.

Dynamo Kyiv on the other hand are 2nd in the Ukrainian Premier League, trailing on 6 points behind the leader Shakhtar. So far Dynamo have a record of 14 wins, 6 draws and 3 losses in 23 games played. In their last match they celebrated a 1-0 win over Veres at home. The Brazilian striker Junior Moraes scored the only goal for Dynamo in the game.

This won’t be easy game for both teams. Dynamo have the advantage to play at home, but Lazio remain a very solid team. It’s going to be a thrilling game to watch.