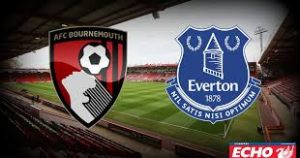 AFC Bournemouth hosts Everton in a game from the 21th round of the English Premier League.

Bournemouth are currently 18th in the league standings and positioned in the relegation zone. They have 17 points won so far and a record of 4 wins, 5 draws and 11 losses. This season started difficult for them and it continues like this. If they don’t improve soon, they could have some serious trouble in the battle against relegation this season.

In their last five matches Bournemouth suffered three defeats and didn’t win neither once. The only points they won were from the draws against Crystal Palace and West Ham United.

Now Everton are coming to town. Everton are a different since the former national manager Sam Allardyce were appointed at the Goodison Park. Allardyce managed to improve Everton’s performance and now they are 9th in the league with 27 points won so far. They have a record of 7 wins, 6 draws and 7 defeats.

Right now Everton are in a run of two consecutive draws against Chelsea and West Bromwich Albion. But a game against Bournemouth is a very good opportunity to get back on the winning ways. Can they do it? We shall wait and see.

Let’s see the team news before the game.

Bournemouth are without the injured Junior Stanislas, Jermain Defoe and Tyrone Mings, while Harry Arter, Charlie Daniels, Brad Smith and Rhoys Wiggins are doubtful for the next game. Adam Federici on the other hand is now fit and ready to return on the pitch.

Everton can’t use the suspended Idrissa Gana Gueye, while Ramiro Mori is injured. Wayne Rooney is recovering from a virus, so it’s not clear if he’d be able to play. Maarten Stekelenburg and Leighton Baines are also doubtful for the game, while Ross Barkley and Seamus Coleman are ready to return.