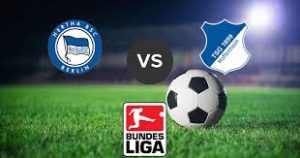 Hertha BSC hosts Hoffenheim in a match from the 12th round of the German Bundesliga. Let’s head out to the capital city of Berlin to see what’s going on with these two teams before their fixture on Saturday.

Hertha are currently 8th in the Bundesliga standings with 16 points won and a record of 4 wins, 4 draws and 3 defeats. Right now the Old Lady are not in a very good shape. In their last five games Hertha made three draws and suffered two defeats. In their last two fixtures Hertha lost, conceding losses against RB Leipzig and Fortuna Dusseldorf. In these two games Pal Dardai’s team conceded 7 goals as well. Right now things are not going well for the Old Lady and they will look for a positive result against Hoffenheim.

Hoffenheim on the other hand are 6th in the league standings with 19 points and a record of 6 wins, 1 draw and 4 losses. Right now Julian Nagelsmann’s team is just one point behind the 4th Eintracht Frankfurt, so even after this round Hoffe could find themselves in the Top 4, which is their main goal.

In their last five games Hoffenheim are almost flawless. Since their defeat against Eintracht Frankfurt, Hoffe enjoyed a stellar run of four consecutive wins against Nurnberg, Stuttgart, Bayer Leverkusen and Augsburg.

In the previous round Hoffenheim enjoyed a 2-1 win over Augsburg at home. Andrej Kramaric opened the score for the home team and Reiss Nelson scored the winner 7 minutes before the end.

These are thoughts about the Bundesliga fixture between Hertha and Hoffenheim at Saturday afternoon. Hoffenheim are the team in a much better shape at the moment, but Hertha have the home ground advantage and they will try to stop their run without a win.