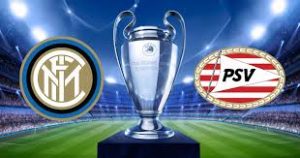 In a very decisive game for them, Inter welcome PSV in a match from Group B of the Champions League. Let’s see what’s happening with these two sides at this moment.

Right now Inter are third in this group with 7 points, being on par with the 2nd Tottenham. But if these two teams finish with the same amount of points, Tottenham will progress to the 1/8-finals because of their better stats in the direct matches.

For Inter everything is pretty simple right now. They have to beat PSV at the San Siro and hope that Tottenham won’t win against Barcelona at the Camp Nou.

Inter started their participation in the group with two consecutive wins, but in the next three games the Nerazzurri won just one point and suffered two defeats. This is the main reason why the Italians were overtaken by Tottenham at the 2nd place.

In their previous clash with PSV in Eindhoven, Inter achieved a 2-1 win at the Phillips Stadion. Pablo Rosario opened the score for PSV, but the Nerazzurri turned the game around with goals from Radja Nainggolan and Mauro Icardi.

For PSV this match is all about prestigie. The Dutch team is at the bottom of the group standings with just one point won, without any chance to progress or to finish third. You can see why Inter are going to be much more motivated to win this one at the San Siro.

It’s clear that Inter are the big favourites in this game. Most probably Luciano Spalletti’s boys won’t have a problem to beat PSV at hom. And in same time everyone will listen to what’s happening at the Camp Nou, hoping that Barcelona will do the job against Tottenham.

That’s what we had to say about the Champions League clash between Inter and PSV. Good luck!