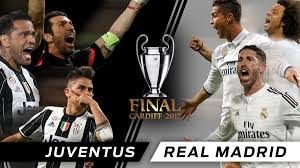 Juventus and Real Madrid are engaging in a spectacular duel for the most precious trophy in the world of club football – the Champions League.

These two European giants will meet in the Welsh capital Cardiff. Real Madrid are looking for their 12th trophy in the competition, while Juventus are trying to win for 3rd time in their history.

Here is how they reached the big final.

Juventus won a group with Sevilla, Olympique Lyonnais and Dinamo Zagreb. They have won four games and in the other two they made draws. They won the group with 14 points. In same time they scored 11 goals and conceded just two.

In the next phase Juve met Barcelona and showed a great class. In the first game The Old Lady thrashed The Catalans with 3-0 at home. In the second leg their defense was once again amazing and the rematch ended with a 0-0 result.

In the 1/2-finals Juventus met the new French champion Monaco. After a 2-0 win in France in the first leg, Juve won the rematch with 2-1 and reached the final.

Real Madrid on the other hand finished 2nd in its group with Borussia Dortmund, Legia and Sporting. They have won three matches and in the other three they made draws. They scored 16 goals and conceded 10.

In the 1/8-finals The Los Blancos eliminated Napoli after a 3-1 win in the first game and the same result in Italy in the rematch.

In the next phase the title holders did the job against Bayern Munich. In the first game in Munich, Real Madrid won with 2-1. But in the rematch they lost the game with the same result, which led to extra time. Arturo Vidal’s red card decided everything and Real Madrid won the match with 4-2.

In the 1/2-finals the Spanish giants eliminated city rivals Atletico Madrid, after a 3-0 win in the first leg and a 1-2 defeat in the rematch.

This is how Juventus and Real Madrid reached the Champions League final. The final step is about to be made! But by who?