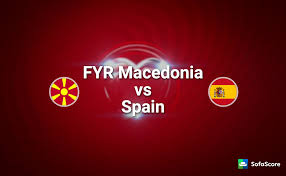 Macedonia hosts Spain in a World Cup qualifier from Group G in the capital Skopje.

The 2010 World Cup champions Spain are currently engaged in a fierce battle with Italy for the first place in Group G. Right now both teams have 13 points in their active, but Spain are leading the group because of a better goal difference.

If they want to keep the first place after this round as well, they need to win in Skopje. In same time Italy are hosting the outsider Liechtenstein, so you could hardly think that they will make a mistake in this game.

Spain and Macedonia already met in November in Granada. The match didn’t end very well for the away team, who lost the game with 0-4. Macedonia’s Darko Velkovski scored an own goal, which was followed by strikes from Vitolo, Nacho Monreal and Aduriz.

Macedonia are currently 5th in the Group G, being the weakest team in it after Liechtenstein. They have won just one of their five games so far – against Liechtenstein, losing all of the four. They have scored 7 goals so far and conceded 11.

It’s obvious that Spain are the clear favourite to win this clash. Everything, but a win for La Roja in Skopje would be a huge sensation. Spain are living a new life under the management of Julen Lopetegui, who replaced the legendary Vicente del Bosque after the Euro 2016 in France last summer. La Roja’s main goal is coming back to its glory days, after dissapointing performance during the World Cup in 2014 and the last European Championship.

As for Macedonia, they could hardly do anything significant in this group, except of playing for their own name and reputation. After losing four games out of five from the beginning of the campaign, it’s obvious that this team can’t be a factor in this group.