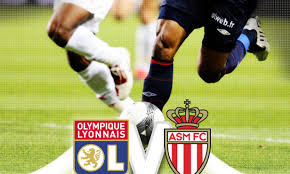 Olympique Lyonnais hosts Monaco in the most interesting game from the 34th round of the French Ligue 1.

Monaco is really close to winning the league, as they are currently on the top of the table, having the same amount of points as champions PSG. But they also have a game in hand, so right now they are the favourites to win the gold medals.

Leonardo Jardim’s team is one of the most impressive and attractive sides in European football this season. Monaco have scored 90 goals in 32 Ligue 1 games so far, which is a really impressive achievement. They also reached the Champions League 1/2-finals, which is also a proof that this team is really good at the moment.

As for Olympique Lyonnais, they are currently 4th in Ligue 1, but on almost 20 points behind the 3rd Nice. Lyonnais’ only chance of reaching the Champions League remains winning Europa League, where they already reached the 1/2-finals after 120 minutes in Istanbul and a win with penalties over Besiktas.

Both teams had european games during the week, but it’s safe to say that Monaco will be much more rested, as their game against Borussia Dortmund was on Tuesday, and Lyonnais played against Besiktas on Thursday.

It remains to be seen how this is going to affect both teams when they meet in Lyonnais on Sunday night. Not just because they will be more fresh, but also because they are the better team, Monaco will be favourites to win the three points. They’re in a terrific run of six consecutive wins in Ligue 1 and the last time they have lost was exactly against Olympique Lyonnais in December.

One thing is for sure – we should expect an exciting and thrilling game between Olympique Lyonnais and Monaco. They are both very good teams, so let’s see if Monaco are going to revenge the loss they suffered against Lyonnais four months ago.