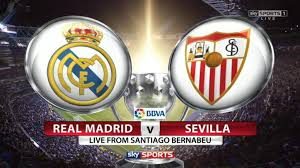 Real Madrid hosts Sevilla in a game from the 37th round of the Spanish La Liga. The Los Blancos must win, if they want to stay in the title race with current champions Barcelona.

Right now Zinedine Zidane’s team is 2nd in the league standings, being on level points with Barca. But Real Madrid also have one game in hand, which could be decisive in the battle for the title. But if they want to use this advantage, The Los Blancos must win their home game against Sevilla on Sunday night.

Sevilla are currently 4th in the league, having a six points advantage in front of 5th Villarreal. We could say that they already achieved their main goal – finishing in the Top 4 and qualifying for the Champions League once again.

The matches between Real Madrid and Sevilla usually offer a lot of goals. Now this game looks more important for the home team, but it doesn’t mean that Jorge Sampaoli’s squad will not give its best to trouble Cristiano Ronaldo and his teammates. It’s a matter of honour after all.

Real Madrid will be without the services of two key players – right defender Dani Carvajal and Welsh superstar Gareth Bale. The good news come from the recovery of central defender Pepe, who is now fit and ready to return in the squad.

As for Sevilla, Pablo Sarabia and Benoit Tremoulinas are missing the game, while Adil Rami and Vicente Iborra are doubtful for the Rojiblancos. Daniel Carrico and Carlos Fernández Luna are returning to the squad after a successful recovery from injuries.

Real Madrid are favourites to win the game, but do not underrestimate Sevilla. Sampaoli’s squad is good enough to trouble any team in the league and it’s not coincedence that they are reaching the Champions League once again. We shall expect a great battle with a lot of goals at the Bernabeu.