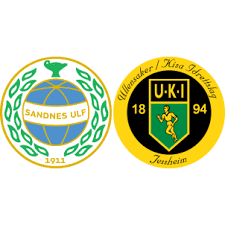 Sandnes Ulf hosts Ullensaker / Kisa in a match from the 17th round of the Norway’s 1. Division.

Sandnes Ulf are currently 8th in the 1. Division standings with 22 points won. They have a record of 6 wins, 4 draws and 6 defeats. Right now Sandnes Ulf are just 3 points behind the 6th Tromsdalen, so they are pretty close to the promotion playoff zone in the league. You can be sure that their goal is to be among the Top 6 of the 1. Division, which would allow them to fight for promotion to the Eliteserien.

In their last five matches Sandnes Ulf won only once – against Asane, with 3-0 at home. They also made one draw against their next opponent Ullensaker / Kisa and suffered three defeats against Notodden, Aalesund and Aalesund again.

Ullensaker / Kisa are 5th in the 1. Division standings with 26 points. They have a record of 7 wins, 5 draws and 4 losses. They are doing pretty well so far, being in the promotion playoff zone of the league. Promotion is their big goal this season. And so far they are showing that they have the tools to chase it.

In their last five games Ullensaker / Kisa lost only once – against the leader Aalesund. Since then, they are unbeaten in four consecutive games, beating Asane and Levanger and doing draws against Sandnes Ulf and Nest-Sotra.

The previous game between these two sides ended with a 2-2 draw. Akinsola Akinyemi and Tapio Heikklia scored for the visiting team of Sandnes Ulf, while Nicolay Solberg and Kristoffer Hansen were able to score for Ullensaker / Kisa.

How you can see, Sandnes Ulf and Ullensaker / Kisa made a high-scoring clash in their last meeting. We believe that this will happen again and both teams are going to score at least one goal in their next meeting.