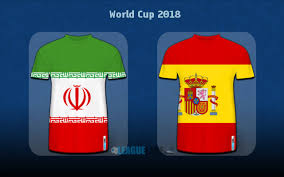 We are heading to the Kazan Arena in the city of Kazan, where Iran and Spain face each other in a match from Group B of the FIFA World Cup in Russia. Let’s see what’s going on with these two teams.

Surprising for many, but Iran started their participation at the World Cup with a win. Yes – with a lot of luck, but Carlos Querioz’ boys beat Morocco in their opening game. The only goal in the match was scored in the last few seconds, when Morocco scored themselves an own goal. Unlucky for them, but luckily for Iran.

Now Iran are in a position to chase something more in this group. They are currently leading the standings with 3 points. If they avoid losing against Spain or even win, this would mean a lot for the Team Melli.

Speaking of Spain, La Roja made some impressive things against Portugal, but the match against Selecao ended with a 3-3 draw. Now Spain are looking for their first win in Russia. A win which will move them closer to the 1/8-finals of the competition.

Diego Costa scored twice and Nacho added a goal too, but these three strikes was not enough for Spain to beat Portugal. The main reason for this is called Cristiano Ronaldo, of course. Spain’s goalkeeper David De Gea was heavily criticized for one of the goals which Ronaldo scored in this game. Some even wanted to see him benched because of this mistake. The manager Fernando Hierro defended De Gea and stated that his position as a number one in the team is untouchable.

But will Hierro make some other changes against Iran? Well, it’s not impossible. Players like Thiago Alcantara, Lucas Vasquez, Marco Asensio and Saul are ready to make an impact, if he recieve Hierro’s trust. The truth is that the Spanish manager have a lot of options to choose from. Right now Spain have a remarkable squad and that’s why they are among the big favourites of winning the World Cup.

One of the big news from the Spanish camp is that Real Madrid’s right defender Dani Carvajal is healed and ready to return in action. After missing the derby against Portugal, Carvajal could take Nacho’s place as a right back against Iran.

This is our examination of the World Cup clash between Iran and Spain at the Kazan Arena in Kazan. We firmly believe that Spain are a huge favourite of winning this game and making a step towards qualification for the 1/8-finals. The truth is that Spain did a very good job against Portugal in the first round, but it was only because Cristiano Ronaldo’s individiual class that they didn’t win.