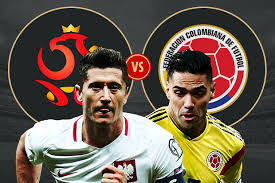 Poland faces Colombia in a match from Group H of the FIFA World Cup in Russia. This game is going to be played in Kazan at the Kazan Arena. Let’s have a look.

This match is crucial for both teams, as they started their participation at the World Cup with losses. Poland lost their first match against Senegal, while Colombia suffered a defeat against Japan after a red card in the first few minutes of the game. Now these two teams are on the edge and they know that they don’t have any other option, but to play for the win. A win in this game would mean keeping the chances for reaching the 1/8-finals. A loss would mean leaving the competition.

Things didn’t go very well for Poland against Senegal. The Polish team lost the game with 1-2, after being two goals down with 30 minutes to go. Gregorz Krychowiak scored for Poland few minutes before the end, but it was not enough for the Europeans to take something more from the game.

Colombia’s manager Jose Pekerman admitted that he regrets about losing the match against Japan, but he also reminded that his team have two more matches to play. Pekerman said that everyone in the team had a calm conversation about what happened against Japan and everything in the team’s dressing room is fine. One thing is for sure – Los Cafeteros are ready to fight for their future in the tournament and they won’t give up without a fight.

The same could be said about Poland as well. Before the start of the competition, the pundits regarded these two teams as favourites for winning the group. Now the situation is a little bit different and they are fighting to remain on line for reaching the 1/8-finals. This just proves how dynamic the World Cup is and how fast things are changing.

Poland’s assistant manager Hubert Malowiejski admitted that stopping James Rodriguez is one of the big tasks in front of the Polish team. The Bayern Munich midfielder is the big inspiration in the Colombian team. Four years ago he even became the top goalscorer of the 2014 World Cup. “We have to keep him quiet and not let him play. This is one of our most important tasks”, stated Hubert Malowiejski.

Meanwhile the Colombian team must shut down Poland’s main striker Robert Lewandowski. Also playing for Bayern Munich, Lewandowski is one of the best strikers in the world in the last five years. He’s a complete forward and he will be ready to score from any chance he gets. That’s why the Colombians will have to pay a special attention to him.

This is our take on the match between Poland and Colombia from the FIFA World Cup in Russia. Both of these teams are on the edge now, so they will need a win in order to make a step towards the 1/8-finals. For the team which loses this game, this is going to be the end at the World Cup.